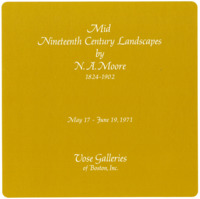 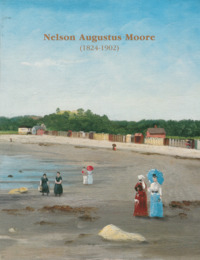 Nelson Augustus Moore was born in Kensington, Connecticut, in 1824 and studied portrait painting in New York City with Thomas S. Cummings and Daniel Huntington between 1847 and 1850.  He returned to Connecticut in the fall of 1850 and taught drawing at the New Britain Normal School for several years. During this period Moore also learned photography and in 1854 he opened his own successful daguerreotype business in Hartford.  Despite the interesting and sometimes famous sitters that graced his studio for the next decade, Moore longed to resume his painting full-time, and finally did so around 1864, leaving the shop to his brother and partner Roswell.

In his search for material, Moore traveled throughout his native Connecticut and the rest of New England and explored New York State, spending many summers painting the scenery of Lake George. His attraction to this region was most likely inspired by John Frederick Kensett, whom Moore admired, and who exhibited his Lake George paintings at the National Academy of Design. A talented self-promoter, Moore was often commissioned by summer residents of Lake George to capture specific views and held exhibitions of his work in his studio for potential collectors.

Having never traveled abroad, Moore’s work is entirely American and celebrates the harmonious, unspoiled views of his homeland. He exhibited at the National Academy, the Brooklyn Art Association, Macbeth Galleries in New York and the New Britain Institute in New Britain, Connecticut, and his work is in the permanent collections of prominent Connecticut museums such as the William Benton Museum of Art and the Mattatuck Museum. Vose Galleries has held three exhibitions of Moore’s work in 1966, 1971 and 1991.