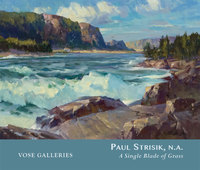 A Single Blade of Grass

“…Still life painting must be of a well understood simplicity, solid, strong, vital, unnecessary details neglected, salient points embellished, made the most of, every touch full of meaning and for the love of beauty.”

The atmospheric quality and harmonious tones of Soren Emil Carlsen’s still lifes helped his carefully arranged objects and flowers merge flawlessly with their surroundings, thus supporting the opinion of curator and scholar Arthur Edwin Bye that he “has an inward eye, a faculty for discerning all that anyone else ever saw, but more – a rhythm and music and poetry, a serenity and dignity and sublimity which makes his still-life groupings classic.”[1] Born in Denmark and trained in architecture at the Royal Danish Academy, Carlsen immigrated to the United States in 1872 and first settled in Chicago. There he found a position as an architect’s assistant and later worked under Danish painter Lauritz Bernhard Holst before taking over his studio when the master returned to Denmark. A year later, Carlsen traveled back to Europe to continue his education, studying in Paris for six months until a lack of funds drove him back to the States. He stayed briefly in New York before moving to Boston in 1875, where he remained for the next eight years. While the first few years in this new city were prosperous, he soon found it necessary to take up engraving and commercial design work to make ends meet but did very well in the field, saving enough money to pursue his painting again. He exhibited landscapes and seascapes at the Boston Art Club in the 1880s, and also began exploring the genre of still life, listing himself in the Boston directory as a still life specialist. His floral canvases soon appeared at additional venues, including the Pennsylvania Academy, while those featuring common household goods, cooking implements, clay pots and brass tea kettles, as well as dead game and fish were inspired by a second stay in Paris in 1884, where he encountered the work of 18th century French still life master Jean Baptiste-Simeon Chardin (1699-1779). Chardin’s depictions of everyday items profoundly influenced the direction of Carlsen’s painting and he began incorporating similar objects into his compositions, paying heed to the play of light on a range of textures and surfaces, while continuing to render the delicate blossoms that were eagerly sought by collectors and celebrated by critics and scholars.

Carlsen moved to San Francisco in 1887, staying on the West Coast for the next four years, but longed for life back east and returned to New York in 1891. While his name became synonymous with still life, he continued painting marine and landscape subjects as well, submitting these for exhibition at an array of venues, including the National Academy, which made him a full Academician in 1906. A retrospective of his work was held at the Corcoran Gallery in Washington, DC in 1923, and during his lifetime, several prominent museums acquired paintings for their permanent collections, among them the Metropolitan Museum of Art (Blackfish and Clams, 1904), the Pennsylvania Academy (Summer Clouds, 1913) and the Worcester Art Museum (Still Life, 1914). This is merely a sampling of the dozens of national museums that count Carlsen’s work among their holdings.