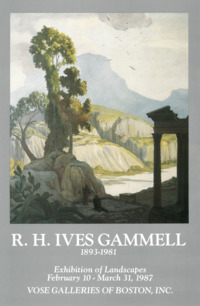 Robert Hale Ives Gammell was born to a wealthy banking family in Providence, Rhode Island. After graduation from the Groton School in 1911, he enrolled in the Museum School of the Boston Museum of Fine Arts and studied with Frank Benson, William Paxton and Philip Hale. After two years in Boston he traveled to Paris to study at the Académie Julian, but his studies in Paris were cut short by the onset of World War One, and he returned to the U.S. in 1914.

During the 1920s Gammell enjoyed a successful career as a decorative and mural painter, but during the Great Depression commissions waned, and he turned to allegorical and religious subjects. He exhibited frequently at the Guild of Boston Artists, Doll and Richards Gallery, and the Copley Society.

Gammell is as much remembered today for his teaching as for his painting. He taught in his studio at Fenway Studios in Boston and in a studio in Provincetown. Dismayed by what he felt was the degeneration of art by 20th century modernists, he wrote The Twilight of Painting to defend traditional academic painting. Gammell painted, taught and wrote until he died in Boston in 1981.