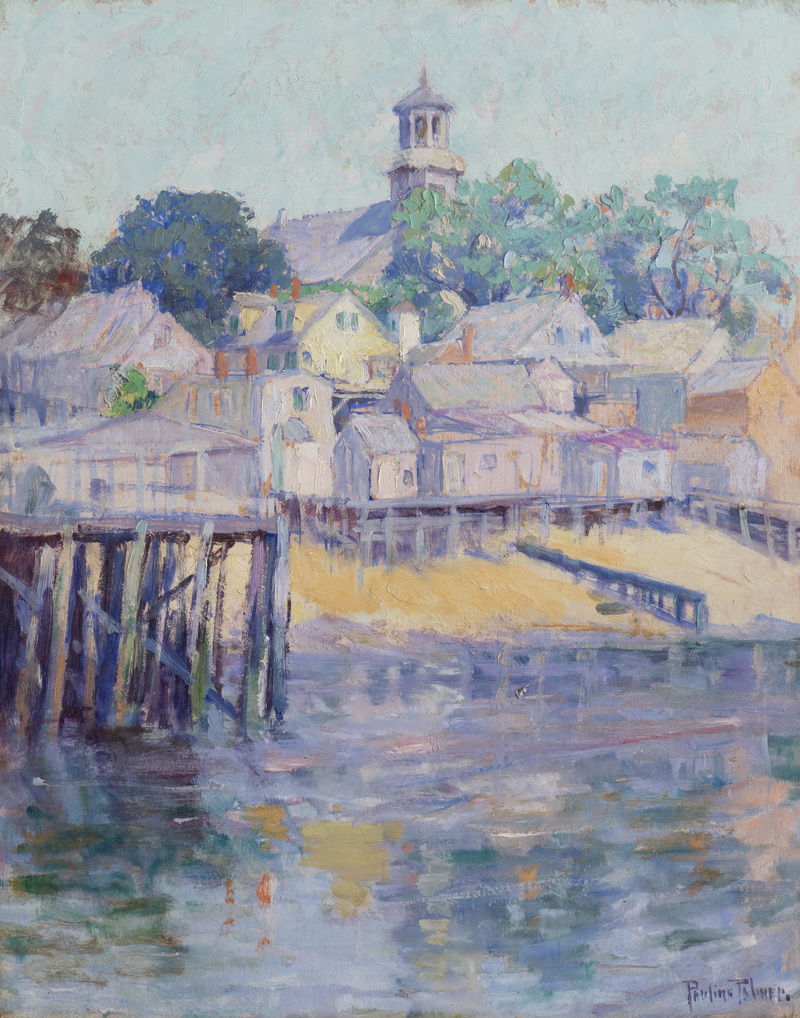 Pauline Lennards Palmer is one of the best-known Chicago women artists, having worked in a tonal academic manner as well as a bright impressionist style, and was referred to as ‘Chicago’s Painter Lady’ in news articles honoring her legacy after her death in 1938. She was a powerful figure in the male-dominated fine arts industry, becoming the first woman elected as president of the Chicago Society of Artists. Today her paintings can be found in the collections of the Union League Club of Chicago, the Rockford Art Museum in Illinois, the Brauer Museum of Art in Valparaiso, Indiana, and the Provincetown Art Association and Museum.

Born in 1867 in McHenry, Illinois, Palmer’s parents encouraged her artistic ability with local classes early on, before sending her to convent school at St. Mary’s Institute in Milwaukee. She went on to teach art in Chicago public schools, and in 1891 married Albert Elwood Palmer, a professor of medicine at Jenner Medical College in Chicago. Albert encouraged her to finish her professional art training, and in 1893 she enrolled at the School of the Art Institute of Chicago, where she studied under William Merritt Chase, Frank Duveneck, Gari Melchers, and Kenneth Hayes Miller. Palmer won several honorable mentions for her impressive work with the human figure during her student years, and in 1896 she began participating in the Institute’s annual exhibitions of American art. After graduating, she rounded out her education by traveling abroad to Paris to study at the Académie Colarossi, the Académie de la Grande Chaumier, and the Ecole des Beaux Arts, learning under Courtois, Lucien Simon, Rene Printe, Raphael Collin, and American expatriate Richard Miller. She exhibited at the Paris Salon from 1903 to 1906, as well as in 1911.

Returning to Chicago in 1902, Palmer opened her own portrait studio and established herself in the city’s art world. She continued to show regularly at the Art Institute of Chicago, in both its annual exhibitions of American paintings and sculpture and in other displays hosted by the museum, and in 1907 alone was awarded three individual accolades: the Municipal Art League Purchase Prize, the Young Fortnightly Club Prize, and the Arche Club Purchase Prize. She also received the Marshall Field Prize at the exhibition of Chicago artists held in Marshall Field & Company’s department store galleries.

Palmer traveled widely in search of inspiration, including frequent return trips to Europe, but in 1915, when the start of World War One made foreign travel unwise, she began summering in Provincetown, Massachusetts, where she studied under renowned American Impressionist Charles W. Hawthorne. When Palmer’s husband passed away in 1920, she increasingly spent more of her time on the east coast, working in a private studio on Cape Cod, yet maintained her close ties to the Chicago arts community.