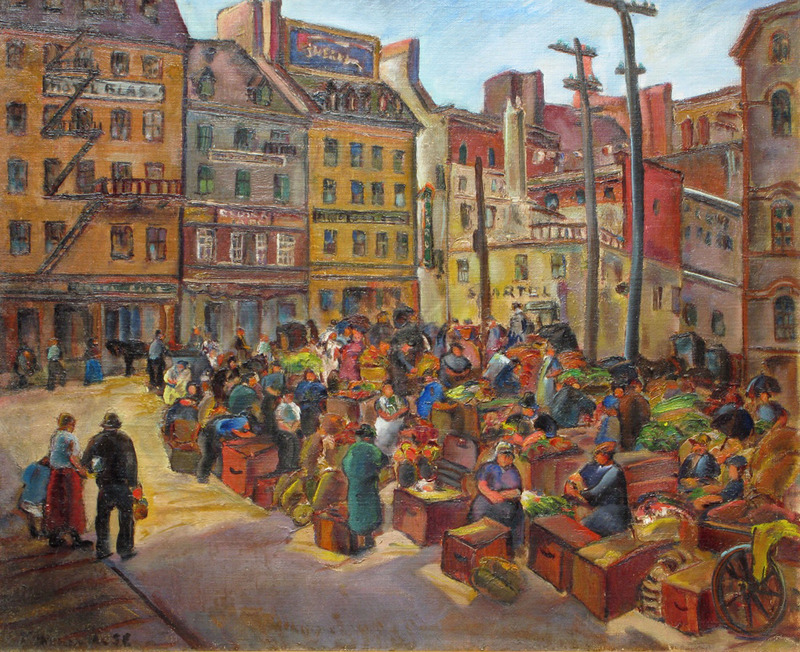 Born in Lynn, Massachusetts, in 1896, Marion Huse showed an early proclivity for the arts and enrolled at the New School of Design in Boston from 1915 to 1919, studying under Douglas John Connoh. She also trained with Henry Salem Hubbell and Eugene Savage at the Carnegie Institute of Art and Technology in Pittsburgh, and took summer classes with Charles Hawthorne at his Cape Cod School of Art in Provincetown. Like many artists, Huse continued her education abroad, traveling to Germany, France and Italy, and all of these combined early influences gave her a strong foundation in the fundamentals of art and an artistic sensibility open to experimentation.

Huse settled in Springfield, Massachusetts, in 1924, during what proved to be a very dynamic time for artists in that city. The Springfield Art League was founded just a few years earlier, and in 1922 the Springfield Artists Guild was established. Huse joined both associations, participating regularly in group exhibitions, and became a notable figure in the art community. She held solo shows at her Harrison Avenue studio and like many working artists, took on commercial work and portrait commissions to bring in extra income. She established the Springfield Art School in 1925 in a room next to her studio, and ran it successfully until 1940. Similar to her own experience, Huse offered students formal training in drawing and painting, but also inspired them to think outside the box and never be afraid to experiment.

Huse became involved with the Civil Works Administration during the 1930s, securing a commission with the Public Works Art Project to paint a portrait of Springfield’s mayor Henry Martens in 1934.  In 1936, she began creating paintings and drawings for the WPA’s Federal Art Project to adorn the walls of various public buildings in both Massachusetts and Washington, DC, and later that year was asked to serve as supervisor for the Project’s Springfield region. Her new role required trips to Boston for progress reports, which in turn brought her own work to a wider audience. She joined the Boston Society of Independent Artists and took part in group exhibitions at the Federal Art Gallery on Beacon Street.

During the early 1930s, Huse’s work reflected the mood of the time. She adopted a muted palette and painted with a back-to-basics mentality, a realism that honored the average man or woman going about their day in their humble, urban environments. While the people and places of New England offered Huse a variety of subject matter, she was equally inspired by her travels to the American Southwest and to Canada.

Always exploring new horizons and subjects, Huse purchased a weekend house in the southern Vermont village of Pownal, and was charmed by the quiet rural countryside and the locals. Her painting, Along the Taconic Trail, painted in 1938 during her travels in the Berkshires, was awarded first prize at the Albany Institute of History and Art, and though she continued to celebrate the humility of her subjects, both landscapes and people, her palette gradually lightened towards the end of the decade and she moved to Pownal permanently by 1940.

After marrying in 1944, Huse moved with her husband to Albany, where she exhibited and taught at the Albany Institute of History and Art, though they maintained their Pownal residence. At the close of World War II, the couple journeyed through France and Italy where Marion sketched, painted and worked on her serigraphy, a medium she had discovered in the early 1940s through her work with the WPA. Huse’s serigraphs were successfully shown at one-man shows in France and in New York upon her return. In 1955, Huse and her husband relocated to Massachusetts, first arriving in Boston and two years later settling in Scituate, where she once again immersed herself in the local art community. She joined the Cape Cod Art Association and the South Shore Art Association, and continued to experiment with her techniques, ranging from collage to abstraction, until passing away at age seventy in 1967.