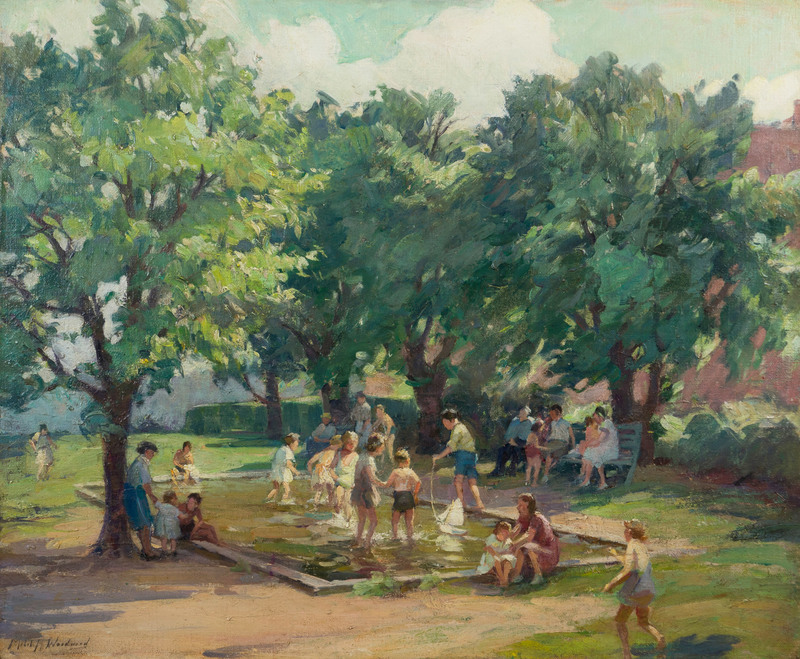 Mabel May Woodward is best remembered today for her sunny beach scenes, painted in a vigorous style that blended influences from her teachers William Merritt Chase (1849-1916), Charles Hawthorne (1872-1930), and Charles Woodbury (1864-1940).  Born in Providence, Rhode Island, she spent ten years of her childhood in San Francisco. Her family returned and she enrolled in the Rhode Island School of Design. Woodward graduated in 1897 and proceeded to New York to take classes at the Art Students League. She worked very intensely, spending at least one summer studying at Shinnecock, William Merritt Chase’s school on Long Island.  [1]

In 1900, Woodward began a twenty-five year teaching career at the Rhode Island School of Design. She continued her own studies during the summers, in Provincetown under Charles Hawthorne and in Ogunquit, Maine, under Charles Woodbury.  Woodbury was particularly influential. Like him, Woodward was a passionate teacher, and she also loved the combinations of humanity and nature found at the Ogunquit beaches in the summer.

An active member of the artistic community in Providence, Woodward was the first female President of the Providence Art Club.  She also joined the Providence Water Color Club, the Rockport Art Association and the Ogunquit Art Association.  Woodward never married bur rather lived with her sister, Minnie Sumner Woodward (1876-1963), in North Providence.  Together they traveled around the United States, returning many times to Charleston, South Carolina, where Mabel painted street scenes and marketplaces. In the early 1920s, they made the first of three trips to Europe. In later years they spent summers in Ogunquit and winter months in Florida and Arizona.