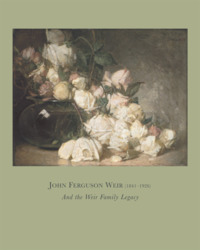 Born in West Point, New York, in 1841, John Ferguson Weir’s artistic journey began under the tutelage of his father Robert W. Weir, the much revered drawing instructor at the Military Academy, whose personal diligence and passion for teaching would inspire his son’s eventual career path. His father’s art program and the mountainous environs of West Point were invaluable resources for the young artist. He wandered through the familiar landscape making botanical sketches, and his earliest paintings captured the grandeur of the Hudson River, though usually done in a smaller format and sold to acquaintances from the Academy as mementos of their time there.  In 1861, Weir’s education was cut short by a brief month-long enlistment during the Civil War, but in the fall of 1862, he departed his family home in West Point for the bustling art center of New York City, taking up residence at the Tenth Street Studio Building and hoping for success in his chosen field.

The welcoming atmosphere of the Tenth Street Studios allowed Weir to develop close friendships with a number of his contemporaries and the more established artists, notably Jervis McEntee and Sanford Gifford. The latter encouraged him to show his first publicly exhibited work, an interior view of his father’s West Point studio, at the Athenaeum Club in January of 1864 and several months later at the National Academy. The painting’s eventual sale and the enthusiastic response he received resulted in his election as an Associate of the Academy, an accomplishment that brought him out of his father’s shadow and into his own as an artist. Two years later, in May of 1866, Weir exhibited one of his most impressive paintings to date, The Gun Foundry (now in the collection of the Putnam County Historical Society in Cold Spring, New York), which led to his appointment as a full Academician.  In the same month, Weir felt financially secure enough to marry Mary Hannah French, the daughter of his father’s West Point neighbors, after several years’ courtship.  The success of The Gun Foundry was followed by another industrial scene, Forging the Shaft, which he exhibited at the National Academy in 1868. Sadly the painting was destroyed by fire while at a New York gallery, but a second version of the scene was sent to the Paris Exposition in 1878. It eventually sold to the Metropolitan Museum in 1901 and remains in their collection to this day. Weir continued to exhibit with the Academy through the end of the century and in time began participating in numerous national arts organizations, including the Brooklyn Art Association, the Pennsylvania Academy of the Fine Arts and the Boston Art Club, among others.

Like many of his contemporaries, Weir wished to sail abroad to further his artistic experience. Leaving his New York studio in the capable hands of his younger half-brother, the artist Julian Alden Weir, John and Mary arrived in England in December of 1868. Their travels eventually brought them to Paris, Italy, Switzerland, Germany, Holland and Belgium, before departing for home in August 1869. The sketches he made in Europe resulted in several finished compositions that were exhibited and later sold to private collectors.

Before departing for Europe in 1868, Weir received an offer to become a Professor and Director of the newly founded Yale School of Fine Arts, the first art school in the country associated with an established university. He worried being away from New York might hinder his professional success, but ultimately accepted the position, deciding, like his father, that teaching art was a noble pursuit. Taking up residence in New Haven in the fall of 1869, Weir was free to design the curriculum to his liking and despite little financial aid and years of opposition from the larger Yale community, he managed to build the school into one of the most respected in the nation by the time of his retirement in 1913, after forty-four years at the helm. While at Yale, Weir continued to send work to New York for exhibition and remained in contact with his Tenth Street Studios friends.  In a departure from his earlier industrial works, his choice in topics ranged from the surrounding landscape of New Haven to more intimate figural interiors and even still life, the latter subject taken up in the early 1880s.

Over the years, Weir made several return trips to Europe and also visited Julian’s farm in Branchville, Connecticut, a place of respite and inspiration for the brothers and their artist friends. He also began taking on portrait commissions for persons associated with Yale and experimented with sculpture, completing several life-sized statues of Yale luminaries for the school. After his retirement in 1913, John and Mary Weir moved to Providence, Rhode Island, to be closer to his daughter Edith Dean Weir and her family. Though his eyesight and health were failing, he rented a studio and joined the Providence Art Club, eager to stay engaged with the creative community. John Ferguson Weir passed away in April of 1926 and was buried in New Haven’s Grove Street Cemetery.