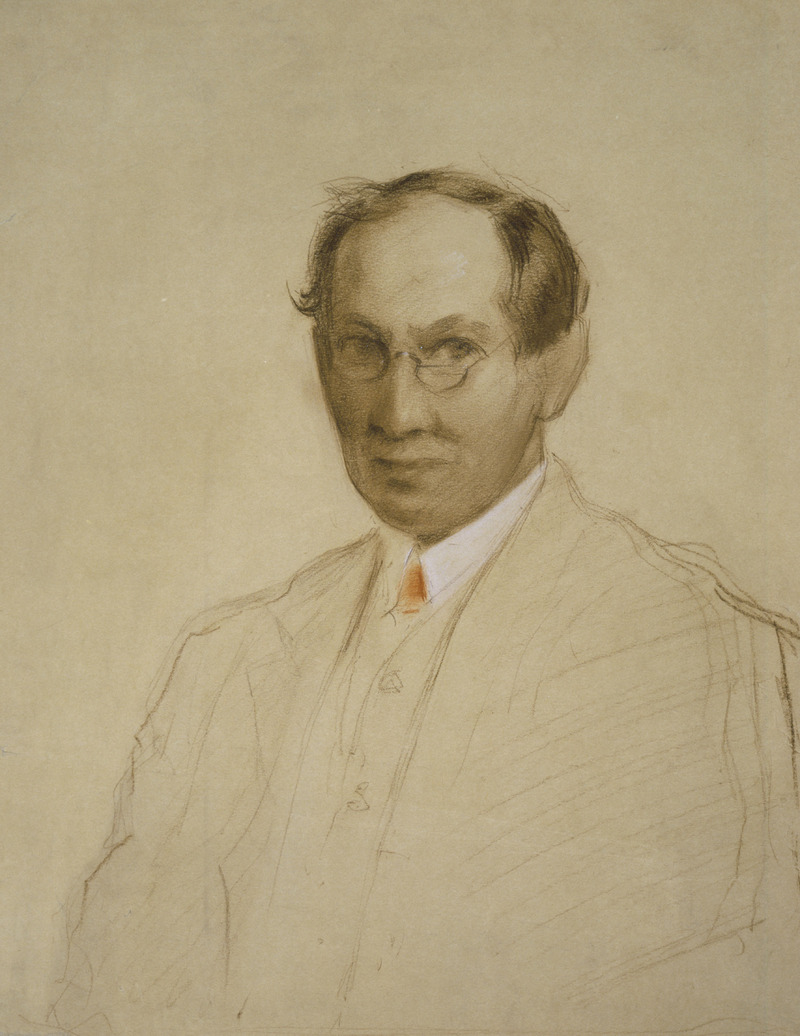 Born in Marlborough, Massachusetts, in 1867, Hermann Dudley Murphy attended Boston’s Chauncey School and enrolled in the Boston Museum School in 1886, studying under Otto Grundmann and Joseph DeCamp.  He worked as an illustrator for various newspapers and magazines before traveling to Paris in 1891, where he spent the next five years. Murphy continued his studies at the Académie Julian and was introduced to the work of Whistler and the Aesthetic Movement, which would come to influence his artistic style. He produced tonalist landscapes and figures paintings, and exhibited portraits at the Paris Salon in 1895. Two years later, he and his new wife, Caroline Bowles, returned to the United States and settled in Winchester, Massachusetts.

Murphy took a studio in the Grundmann Studios building on Clarendon Street in Boston’s Back Bay, which then housed the Copley Society and a number of notable Boston artists.  Around 1899, he began designing and carving frames, embracing the Whistlerian belief that a frame and painting should work in harmony. Murphy moved his studio to Winchester and joined efforts with Charles Prendergast and Walfred Thulin to establish the highly successful Carrig-Rohane frame shop in 1903. The business moved back to Boston two years later and in 1916 was sold to Vose Galleries, which carried on Murphy’s tradition of exquisitely hand-carved frames until 1939.

After divorcing Caroline in 1916, Murphy married watercolorist Nellie Littlehale Umbstaetter and moved to Lexington, but remained a vital presence in Boston’s art community. He was a member of the Guild of Boston Artists, the Boston Art Club, the Boston Water Color Club, the Boston Society of Water Color Painters, and the Copley Society, and joined the North Shore Arts Association, the National Academy of Design and the Salmagundi Club.  Murphy was also a devoted teacher and accepted a position at the Harvard University School of Architecture, where he remained for thirty-six years.

Robert C. Vose was a close friend and admirer of Murphy. In a catalogue for the 1945 “Memorial Exhibition of Paintings by H. Dudley Murphy” at the Guild of Boston Artists, Vose writes:

With the passing of Mr. Murphy, the world of art has lost one of its most delightful members and one of its best influences for technical skill, refinement, and beauty. Mr. Murphy’s early work was influenced by the subtlety of Whistler. His paintings are outstanding examples of conscientious development of perfection in drawing and technique. His rich, luscious flowers in oil are seldom equaled in our generation, and his later work has a technique that is a joy today. His opinions, like his art, were the result of profound study, and when formed, could not be shaken, for his courage was equal to any controversy. His home in Lexington was as perfect an “Arcadia” as humans could desire. I feel his loss as personal, for through a long and intimate acquaintance he won my deep admiration and affection as an artist and a man.[1]