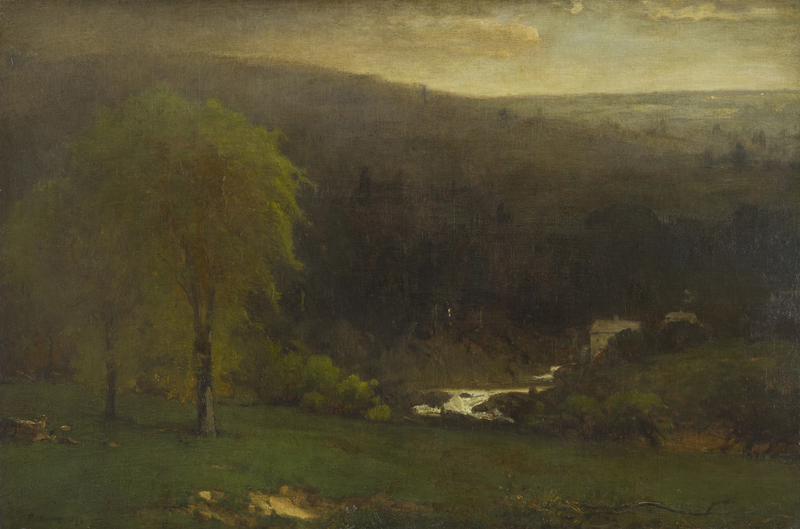 “A work of art does not appeal to the intellect. It does not appeal to the moral sense. Its aim is not to instruct, not to edify, but to awaken an emotion. This emotion may be one of love, of pity, of veneration, of fate, or pleasure, or of pain; but it must be a single emotion, if the work has unity, as every such work should have, and the true beauty of the work consists in the beauty of the sentiment or emotion which it inspires.”

George Inness is one of the most important American landscape painters of the nineteenth century. Born in New York and raised in Newark, New Jersey, his education included lessons with itinerant painter John Jesse Barker and a brief period of study with Regis Gignoux, thus he is considered primarily self-taught. Inness began exhibiting with the National Academy of Design in the mid-1840s and his early work reflected the powerful influence of Thomas Cole and other members of the Hudson River School. Following a trip to France in 1853, the artist began to soften his style, as elements of Barbizon naturalism entered his vocabulary, and by 1865 he had immersed himself in the mystical and metaphysical writings of the scientist-philosopher Emanuel Swedenborg. Something of Swedenborg’s vision of the nature of God, and the relationship between man and nature resonated deeply within him. While his contemporaries focused on transcribing the grandeur of the American wilderness, Inness’ vision of landscape deepened as he sought to portray the spirit and poetry of nature.

Inness’ diversion from the expected brought challenges; although he was elected an Associate of the National Academy in 1853, critics voiced their disappointment in the direction of his work and it was not until the mid-1860s, as the popularity of the Hudson River School was diminishing, that Inness began garnering the respect he deserved. During the Civil War, Inness attempted to enlist but failed the physical exam and threw his energy into gathering donations for the Union’s efforts. As the country reeled from the conflict and aspired to heal following its conclusion, the artist’s emotionally expressive work found new appreciation among critics and collectors seeking connection to the natural world. He was made a full Academician in 1868 and today his paintings grace the walls of most major American art museums, and are also in several international collections, such as the Thyssen-Bornemisza National Museum in Madrid, Spain, the National Gallery in London, England, and the Musée d’Orsay in Paris, France.