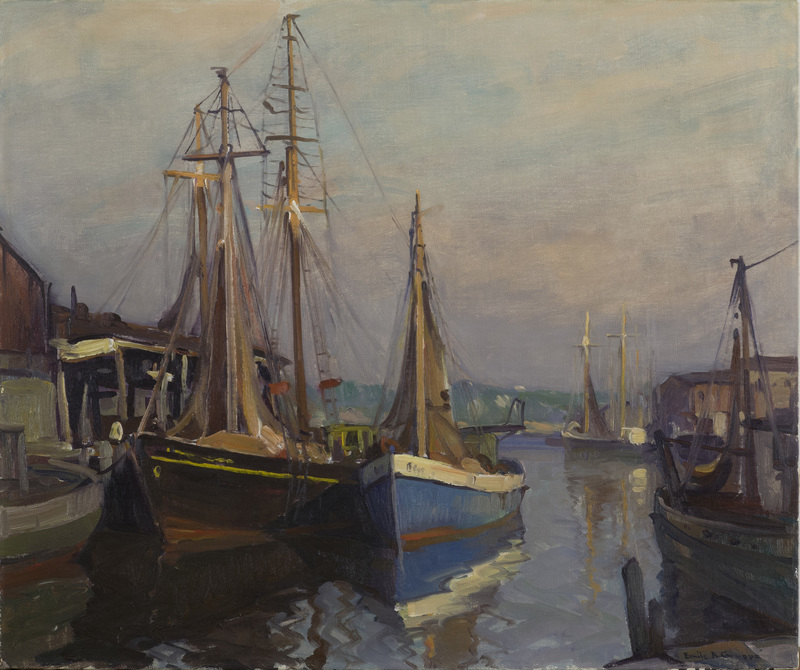 Emile Gruppé was born in Rochester, New York, but spent most of his childhood in Holland with his father. Upon returning to the United States, he studied at the National Academy of Design in 1912 and 1914, and at the Art Students League from 1914 until 1920. Throughout his training, Gruppe had many well known instructors, including Charles Hawthorne, George Bridgman, Charles Chapman and Richard Miller, and also Woodstock, New York, artist John F. Carlson, with whom he studied for four years.

In the early decades of the 20th century, Massachusetts’ Cape Ann was a magnet for artists seeking summer months out of the hot cities of Boston, New York, Chicago and beyond.  Some were traditional artists, some were moderns. Some, such as John Sloan, Edward Hopper, and Childe Hassam, were nationally known, and their presence added luster to the mix. Emile Gruppé first came to Cape Ann after he saw the work of North Shore notables William Lester Stevens and Frederick J. Mulhaupt at the National Academy of Design in 1925. Soon after the exhibition, Gruppé and his father, Charles, arrived in Rockport and lived for four years on Bearskin Neck.

By 1929, Gruppé had moved to nearby Gloucester and established his gallery and studio in the town’s old one room schoolhouse at 32 Rocky Neck Avenue. Over the following years, he became well connected to the art circles of the day, exhibiting his work at the National Academy and Salmagundi Club in New York, the Art Institute of Chicago and, locally, at the Rockport Art Association, the Gloucester Society of Artists and the North Shore Arts Association. But Gruppé, with his jovial personality and easy going nature, was a teacher at heart so in 1942, he and John Carlson formed the Gruppé Summer School, which remained in operation until the mid 1970s. He was a well liked and respected instructor who believed that an artist’s inspiration should be found out of doors. In one of his three books on painting he wrote: “Outside you see and feel the character of your subject. It’s an open book – all you have to do is learn how to read.” [i]

While Gruppé was a fixture on the Gloucester waterfront, he also traveled north to Vermont to paint beginning in the 1930s and through the 1940s, joining friends Chauncey Ryder and Carlson. By the early 1950s, however, the harsh New England winters soon inspired him to make seasonal trips to the Florida coast, where more temperate climes afforded the artist both a change in subject matter and good fishing. At first he stayed with friends and taught painting classes on the beach, but by 1955, Gruppé purchased a home in Naples and began producing sunlit canvases with swaying palms and a lighter, warmer palette.

Gruppé won numerous prizes during his lifetime and continued to teach and participate in New England exhibitions through the 1960s and early 1970s. Examples of his work are held in the public collections of the Los Angeles County Museum of Art and the White House.