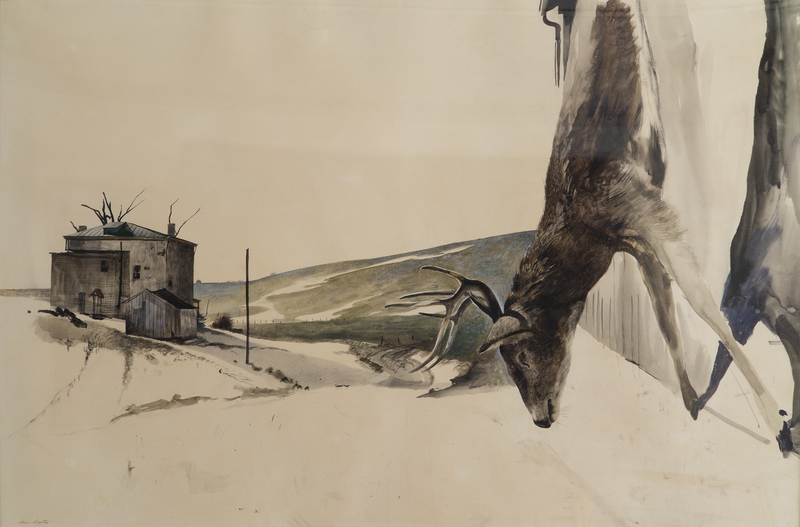 Born in Chadds Ford, Pennsylvania, Andrew Wyeth received his early training from his father, acclaimed artist and illustrator N. C. Wyeth. The Wyeth family summered in Maine where Andrew became enamored with the work of Winslow Homer, and in 1937, he was launched into the art world with a sold out solo exhibition of watercolors at New York’s Macbeth Gallery. Soon after, he began to experiment with egg tempera at the encouragement of his brother-in-law, the artist Peter Hurd, and his wife Betsy, whom he met in Cushing, Maine, in 1939 and married in 1940. Betsy introduced Andrew to her friend and neighbor Christina Olson and in 1948, he completed one of his best known works, Christina’s World, which was shown at Macbeth and purchased by the Museum of Modern Art. He continued to work in watercolor and egg tempera and spent much of his time painting around Chadds Ford and in Maine, where he continued to summer with Betsy and his family and was especially attracted to Monhegan Island.

Wyeth was elected to the American Watercolor Society in 1940, and five years later became a full member of the National Academy.  Most major museums have an example of his work among their holdings, including the Art Institute of Chicago, the Pennsylvania Academy, and Boston’s Museum of Fine Arts, with the largest collections likely found at the Farnsworth Art Museum in Rockland, Maine, and the Brandywine River Museum in Chadds Ford, Pennsylvania. His work has been exhibited at the Art Institute of Chicago, the Pennsylvania Academy, the Museum of Modern Art in New York and the Museum of Fine Arts, Boston, among many other institutions.

References: Falk, Who Was Who in American Art, 1999; Russell W. Anderson, The Dory Man, Friday, (excerpt from Along the Way to Port Clyde, America, published online), regarding his reminiscences of his uncle.