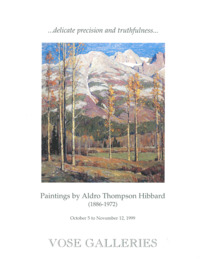 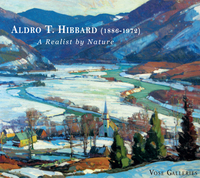 A Realist by Nature 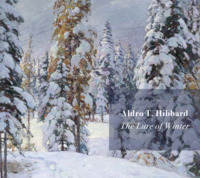 Aldro Hibbard, like his namesake, 16th century Italian artist-naturalist Ulysses Aldrovandi, found enough in nature for a lifetime of contemplation and study. Trained at the Boston Museum School, Hibbard carried forth the tenets of traditional academic art into the 20th century. Upon his return to Boston from a whirlwind tour of Europe, Hibbard painted several fine winter landscapes, including Winter Days, which was purchased by the Museum of Fine Arts in 1920. He exhibited widely across the U.S. and launched himself in the Boston art world with a one-man exhibition at the Boston Art Club in 1916. Three years later, a show of his winter scenes at the Guild of Boston Artists received glowing reviews.

Hibbard had long been interested in snow-covered landscapes, submitting one of his earliest, February Thaw, to the National Academy. He acknowledged a debt to the winter landscapes of Willard Metcalf, specifically the technique of creating a veil of delicately-toned colors, one placed next to another, to describe light and shadow on snow. In his early canvases, Hibbard practiced a similar technique that produced a delicate pointillist feeling, which he called “broken color.” Equally important was Metcalf’s practice of painting outside in the middle of winter; Hibbard’s snow scenes of the Canadian Rocky Mountains painted during his honeymoon in 1925, as well as his Vermont scenes, attest to his love for painting in harsh conditions. Hibbard often trekked many hours before finding his ideal subject matter under the right conditions. A story in John L. Cooley’s book on the artist relates how eager he may have been to recreate a scene he had just been painting the day before: “Painting a winter scene, with a spring brook in the foreground, he didn’t finish the canvas at one sitting…and went back the next day. The water had frozen. He couldn’t wait for a thaw, because the snow would melt, leaving brown patches he didn’t want. ‘So,’ he recalled, ‘there was nothing for me to do but start the brook running again. It took an hour to chop the ice. Then I went to my easel and had no further interruption from natural phenomena.’”[1]

By the 1930s, Hibbard spent winter months in Vermont, and the rest of the year in Rockport, where he established the Rockport Summer School of Drawing and Painting and grew to become a legendary member of the North Shore artist colony and even the Rockport baseball team. Each spring, Hibbard was responsible for choosing the exact shade of red that the town would paint the fishing shack commonly referred to as Motif #1. A leader in this community, he was also active in nearby Boston, and in 1965 the Guild of Boston Artists, where Hibbard had exhibited for 45 years, mounted a retrospective exhibition of his work. About the exhibition, R. H. Ives Gammell (a leading teacher of the Boston School of painters) commented: “Paintings by Aldro T. Hibbard recall the artistic standards for which the Boston painters were nationally known throughout the first quarter of our century. The exhibition...includes many of the artist’s finest landscapes which are of a quality no painter now living, here or abroad, could remotely approach.”