Exhibition: A Light Exists in Spring 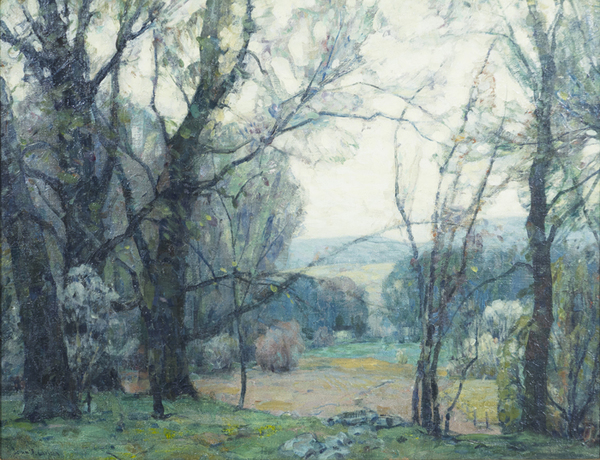 We are pleased to present A Light Exists in Spring, an exhibition including over thirty works that encompass the variety of seasonal expression that spring has to offer. It will be viewable online and in the gallery March 31st - April 30th, 2017.

At the New England Society's annual dinner of 1876, speaker Mark Twain humored, "Old Probabilities has a mighty reputation for accurate prophecy, and thoroughly well deserves it. You take up the papers and observe how crisply and confidently he checks off what today's weather is going to be on the Pacific, down South, in the Middle States; see him sail along in the joy and pride of his power till he gets to New England, and then....Well, he mulls over it, and by and by he gets out something about like this: Probable nor'-east to sou'-west winds, varying to the southard and westard and eastard and points between; high and low barometer, swapping around from place to place; probable areas of rain, snow, hail, and drought, succeeded or preceded by earthquakes, with thunder and lightning. Then he jots down this postscript from his wandering mind, to cover accidents: 'But it is possible that the program may be wholly changed in the meantime.'"

Twain continues, "In the spring I have counted one hundred and thirty-six different kinds of weather inside of four and twenty hours...Yes, one of the brightest gems in the New England weather is the dazzling uncertainty of it. There is only one thing certain about it, you are certain there is going to be plenty of weather."

We are pleased to present over thirty works that encompass the variety of seasonal expression that spring has to offer, from March's last patches of snow through May's brilliant blossoms. A Light Exists in Spring features works by 19th and 20th-century artists such as John F. Carlson, Hermann Dudley Murphy, and John J. Enneking, as well as recent works by our Contemporary-Realist division. The exhibition will be viewable online and in the gallery March 31st - April 30th, 2017.