Exhibition: Off the Beaten Path 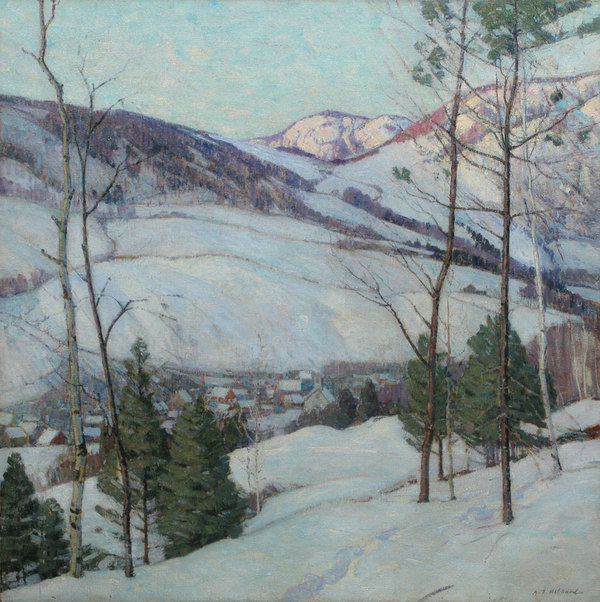 Although trained in figural work at the Massachusetts Normal School and the School of the Museum of Fine Arts, Boston, Hibbard didn't want to spend life indoors, nor cater to the wishes of clients who commissioned portraits. Instead, he headed to the streams and woods of the countryside where he painted landscapes on the spot, often traveling miles into the woods to find loggers, maple sap gatherers, and snow-laden spruces. "My father wasn't a religious man," stated Elaine Hibbard, "but he found in the woods a sense of the divine in the beauty of nature. It was a place for solace and contemplation."

Hibbard never shied away from the difficulties of painting outside; to the contrary, he seemed to revel in the challenge. He had the stamina to carry forty pounds of artist materials with him deep into the woods to paint for hours in the depths of winter and paid close attention to shifts in weather. This provided the artist an acute understanding of the effects of light and atmosphere on the mountainous regions he preferred to paint. As he imparted to his students, "Snow is the most sensitive subject, subtly influenced by sudden changes in light. It is never dead white!”

Vose Galleries has enjoyed a long-standing relationship with Aldro T. Hibbard. He first exhibited at the Galleries in 1919. From that point on, the Voses admired and promoted Hibbard’s work, through the heights of the ‘twenties, the difficult days during the depression, and through to present day. Off the Beaten Path features scenes of Banff, Canada, painted on the artist’s honeymoon; of Vermont, where the artist spent many winters; and the coastal town of Gloucester and Rockport, Massachusetts, where the artist spent many summers. The exhibition will be viewable online and in the gallery January 7th through March 4th.