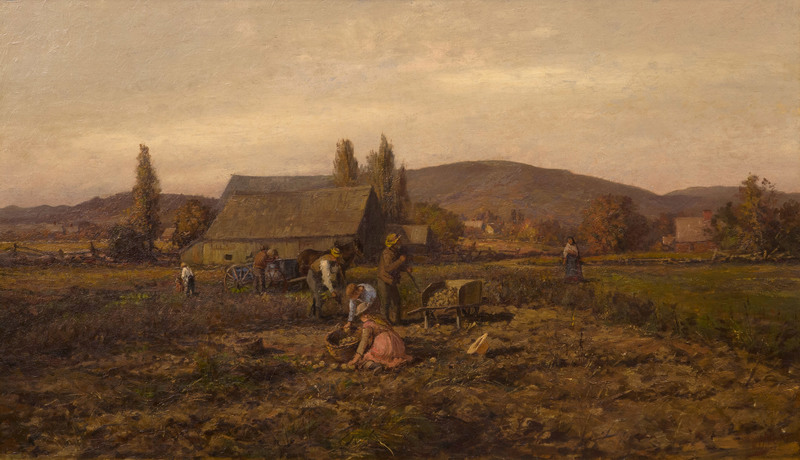 Go out and look at any landscape….there is a sentiment, a feeling, which pervades the whole – you may call it the poetry of nature if you like – something which you cannot see, which is not material and yet is as much a part of the landscape as the trees and grass themselves. If you don’t get that, you don’t get anything, and your picture is nothing but a colored map. But the man who can reproduce that feeling on canvas, who can make the one who sees the picture feel as he felt, that man is an artist, and his work is a work of art.

It took William Preston Phelps over a decade as a professional artist to discover a landscape that moved him so powerfully that it inspired his greatest body of work. Ironically, this landscape had been present throughout his life, as it was the setting of his youth: the foothill region of New Hampshire’s Mount Monadnock. Phelps had left his family homestead in Chesham, New Hampshire, as a teen to apprentice with a sign painter in Lowell, Massachusetts, where he quickly developed a profitable career in the decorative arts. A landscape painter by hobby, Phelps was encouraged by his friends to forgo this career and pursue his talents, and in 1875 he traveled to Munich to begin a seven year term abroad. Phelps returned only briefly to the United States in 1878 to exhibit for the first time at the National Academy of Design, where his four works were met with great enthusiasm and immediate buyers. It was not until the artist inherited his family property in 1890 that he ultimately returned to his native soil and recognized the unique beauty of its landscape.

During Phelps’ travels abroad, he had sketched the countryside throughout Germany, France and Italy, studying the peasantry and developing his devotion to en plein air work. With a solid foundation from his training at the Munich Royal Academy alongside Frank Duveneck and William Merritt Chase, Phelps was recognized as a skilled painter of landscapes and gladly joined the Boston artistic circle upon his return in 1882. His Tremont Street studio was adjacent to such great figures as Enneking, Ordway and Champney, though he relocated to Lowell shortly thereafter, where the artist felt he was better known and valued.  In 1890 with the death of his father, Phelps’ residence would change yet again, but this time for a permanent move back to New Hampshire.

In a sizeable studio and gallery which he built across the road from his ancestor’s 1765 homestead, Phelps could gaze at the grand form of Mount Monadnock just a few miles away. Generally, he criticized artists who confined themselves to their studios and was instead faithful to painting out-of-doors, working on huge canvases in the open air and even constructing shelters around them so as to complete the works on site. His good friend and artist John Coggeshall recalled one instance during which Phelps’ painting was swept downstream by a roaring brook that had flooded its banks while the two painters took shelter from a downpour nearby. During the winter months, Phelps was more fortunate, trekking across the local towns while pulling a portable shed which he had erected upon a sled. From within its windowed walls, Phelps could comfortably paint beside the warmth of a small oil stove and complete his oils during even the most inclement weather.