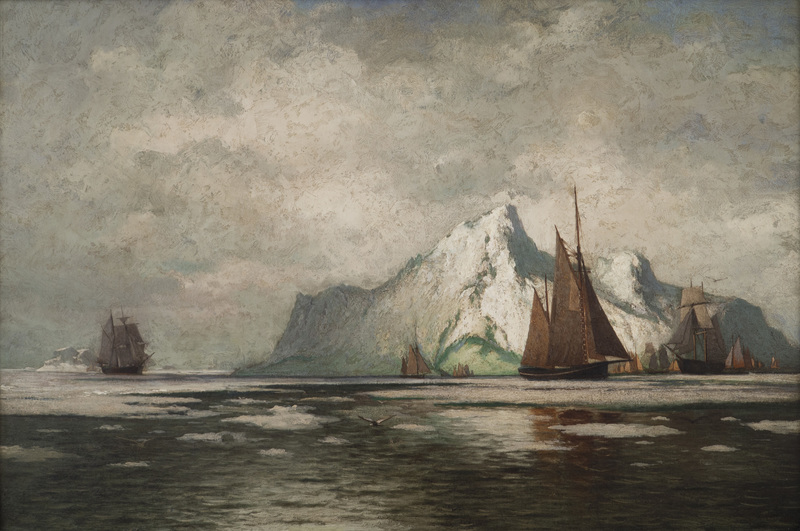 Born into a Quaker family in Fairhaven, Massachusetts, William Bradford was encouraged to go into the family business, a ship outfitter and dry goods store in the whaling port of New Bedford. Although he obliged his father, he spent more time painting than working, and by the time he turned thirty it was evident that William would become a professional artist. Bradford began his career in New Bedford, painting detailed portraits of whaling ships and sea merchants. In 1855 Dutch marine painter Albert Van Beest arrived in Fairhaven, and spent two years instructing Bradford – his only formal training.  Under Van Beest’s guidance, Bradford began painting more dramatic themes and complex compositions, yet he maintained much of his own linear style, most likely influenced by the work of Boston-based English topographical marine painter Robert Salmon.

In 1860 Bradford moved to New York City and took a space in the Tenth Street Studio Building, where he met fellow New Bedford artist Albert Bierstadt.  Inspired by Bierstadt’s and Frederic Church’s artistic expeditions to new frontiers, Bradford made the first of several trips to the Arctic in 1861. Around this time he formed a friendship with Seth Vose, who sold many of Bradford’s paintings in his galleries in Providence and Boston. In a letter to Vose, he conveyed the excitement he felt regarding the dramatic Arctic landscape:

The subject is Whalers near Cape York, coast of Greenland, under the light of the Midnight Sun… This is one of the most effective subjects for a painting I have ever painted showing the rich glow of the midnight hour as the sun skirts the horizon for about two hours and then commences to rise again and thus another day is commenced. [i]

In 1869 Bradford embarked on his seventh and final artic expedition aboard the Panther, a sealing ship, in St. John’s, Newfoundland.  Accompanied by a crew of thirty, including two photographers, this art expedition proved to be his most ambitious journey thus far, as the Panther traveled through one hundred miles of pack ice into Melville Bay, Greenland.  He established a studio on Panther’s deck, and while the photographers documented the voyage, Bradford spent his time sketching the panoramic views of what he described as “the terrible aspects of the Frigid Zone.” Bradford often used the photographs to supplement his own sketches as inspiration for large studio compositions.

A popular subject for his sketches and photographs was the numerous icebergs that surrounded his ships, which he incorporated into almost all of his paintings of the Arctic.  In 1873 Bradford published his travelogue, The Arctic Region: Illustrated with Photographs Taken on an Art Expedition to Greenland, which included both photographs and written descriptions of his arctic journeys. About the beauty and awe-inspiring nature of the icebergs, he wrote:

Not a breath of wind was stirring, and the deep blue of an Arctic sky was reflected in the water so strangely flecked with indescribably icy forms… Nor were the colours wanting to carry out this illusion. From dead white to glossy, glistening satin; from the deepest green to all the lightest shades; and from faint blue to deepest “lapis lazuli”; and again, as some lofty berg passed between us and the sun…. [ii]

The voyage resulted in a commission from Queen Victoria, titled The Panther off the Coast of Greenland under the Midnight Sun, completed in 1873, which garnered acclaim for Bradford both here and in England.

By 1872 Bradford was living in London, where he lectured on the Arctic and benefited from continued interest in his voyages. He returned to the United States in 1874 and was elected an Associate Member of the National Academy of Design. He later kept a studio in San Francisco and traveled widely throughout the western United States, painting the Yosemite region and the Sierra Nevada. At the end of his life Bradford returned to Fairhaven, and died unexpectedly on a lecture trip to New York in 1892.