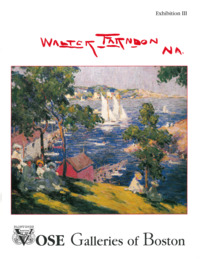 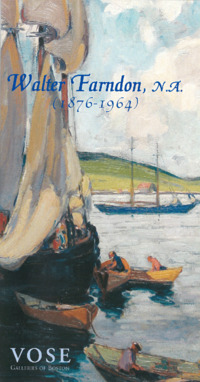 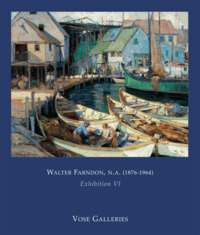 …the principal payment for an artist is not in money…but in the personal satisfaction of creating beauty (as personally seen and felt), and giving to others some of the pleasure you have experienced in the producing.

Living and working in an era of passionate and often controversial changes in the art world, Walter Farndon managed to retain the essential pleasure of creation.  Called “The Painter’s Painter” in New York circles, he captured some of America’s most dramatic scenery, particularly the Eastern seaboard - from New Jersey to Nova Scotia - in a bold, intimate style.

Farndon began his career in the early 1890s, painting floral motifs in watercolor for a carpet factory.  Determined to become a professional artist despite his family’s financial struggles, he left the carpet factory after a few years to enroll in the free schools of the National Academy of Design. After thirteen attempts, his drawing of a plaster cast of the Discobolus (discus thrower) – which he worked on nightly for an entire month – was finally accepted by the Academy Committee in 1898.

Farndon’s early persistence paid off; he was elected as a full National Academician in 1937. He also belonged to the New York Water Color Club, the American Watercolor Society, the Allied Artists of America, the American Artists’ Professional League, the Guild of American Painters, the National Arts Club, the New York Society of Painters, the Grand Central Art Galleries and the Salmagundi Club, among others. He exhibited his work and won numerous prizes throughout New York, and at the Pennsylvania Academy, the Art Institute of Chicago, the Corcoran Gallery and the Boston Art Club. Vose Galleries has mounted six solo exhibitions of Farndon’s oil and watercolor paintings, in 1991, 1992, 1994, 1996, 2006 and 2013.