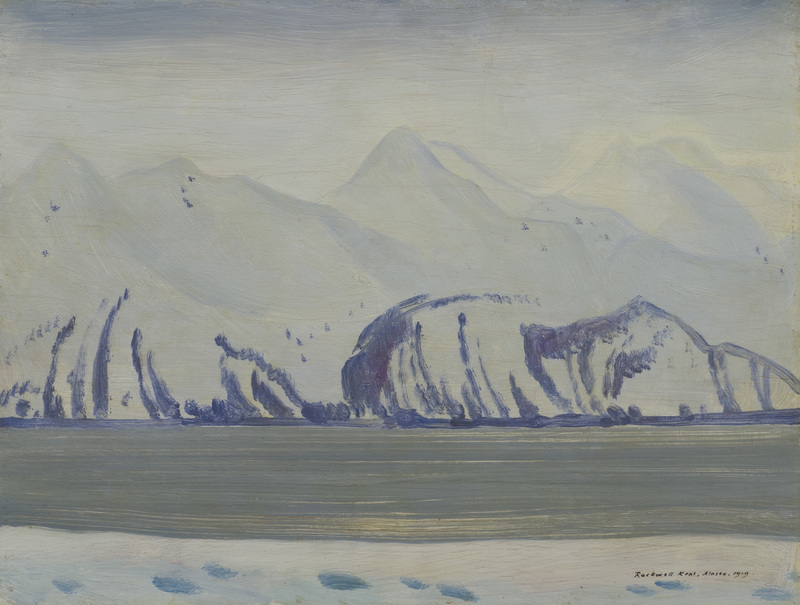 Rockwell Kent is remembered within the context of American art history for his seemingly endless fount of energy, his constant pursuit of the sublime while exploring remote and difficult locales, and his unwavering commitment to progressivism. Born in Tarrytown, New York, and displaying a talent for art at an early age, a teenaged Kent spent several summers at William Merritt Chase’s Shinnecock Hills summer school on Long Island and was offered a scholarship to study at Chase’s New York School of Art. However, his family’s precarious finances due to his father’s untimely death when Kent was five compelled him to enter Columbia University in the fall of 1900 to pursue a more reliable career in architecture. He excelled in his classes over the next few years, but just shy of earning his degree Kent’s passion for painting won out; he inquired about the scholarship and in the fall of 1902 began his formal art studies, alongside classmates Edward Hopper and George Bellows, at the New York School of Art under Robert Henri and Kenneth Hayes Miller. He also worked as an assistant to Abbott Handerson Thayer at his Dublin, New Hampshire, studio, in the summer of 1903, later showing a painting called Dublin Pond at the Society of American Artists in 1904 that was purchased by Smith College, the first of many public collections to acquire a Kent. While all of these luminaries played a role in the direction of Kent’s work, Thayer’s reverence for nature, evidenced by his scenes of Monadnock in all seasons, had a particularly strong influence when it came to Kent’s attraction to the rawness of landscape painting.

At the urging of Robert Henri, Kent first traveled to Monhegan in the summer of 1905 and was immediately enchanted with the island’s rugged cliffs and powerful seas. He extended his stay to December, laboring with the fishermen and carpenters to make ends meet while painting in his off-hours, and revealed a boundless energy and delight in hard work that benefitted him throughout his career. The following year he used his architecture training to design and build a home, and later a studio, for all-season use and spent the next several years creating the series of paintings shown at Clausen’s in 1907 to critical, though not quite financial, success. With fluid brushwork, Kent’s depictions of Monhegan distilled the island’s primordial terrain into expanses of form and color, highlighting the stark beauty of the place without artifice or sentimentality. He left the island in 1910, but would return from time to time over the years and today both his home and studio are on the National Register of Historic Places.

Kent returned to New York, now a father and married to Thayer’s niece Kathleen, and worked as an architectural draftsman while still trying to advance his professional career as an artist. Unlike some artists, however, Kent was fortunate to have caught the eye of several prominent art collectors and gallerists, such as Charles Daniel of Daniel Galleries, who helped finance his next undertaking. In February of 1914, his search for new landscapes to paint drove him to take his family to Brigus, Newfoundland, a place he had visited briefly in 1910. He hoped this second trip would allow him to merge his realist sensibilities with a growing desire for self-expression, but unfortunately they were forced to leave after only a year and a half due to Kent’s anti-war stance and the villagers’ baseless suspicions of his being a German spy. Many of the resulting artworks remained in his collection until his death, yet, like Monhegan, the experience increased his determination to explore distant shores and harsh climes, and following a few years in New York where he found success in illustration, Kent acquired the sponsorship of collector Ferdinand Howald and departed for Alaska in August of 1918.

Kent and his nine-year-old son, also Rockwell, settled on Fox Island in Resurrection Bay, and went about fortifying the stable turned cottage offered to them by the island’s only other resident, Olson, for the coming winter season. A voracious reader and gifted writer, Kent sent letters home to his family and friends describing their adventures and the magnificence of the landscape that inspired and resulted in a body of work later shown in New York to much fanfare. In April of 1919, a collection of Alaska drawings was featured at M. Knoedler and Company and one year later the gallery hosted a display of his powerful Alaska paintings that provoked the following from American Art News: “[Kent’s paintings] evidence the spirit of Alaska in its lonely spaces, menacing glaciers, serrated hills and wave-torn coasts...His outlook is naïve, the organization of his themes ever dramatic and intense, his palette of the simplest. And the same mysticism and masterful, living strength in his recently exhibited drawings are repeated in these oils.”4 In addition to major oils, such as Pioneers (Bowdoin College Museum of Art), Resurrection Bay (Portland Museum of Art), and North Wind (Phillips Collection, Washington, DC), Kent returned from this trip with numerous examples of what he termed ‘Alaska Impressions,’ smaller pieces painted on panel in which he captured a fleeting reaction to the way sunlight and color played across snow-capped mountains and crystalline seas. Simultaneous to his Knoedler shows, Kent’s highly descriptive letters and journal entries from his stay formed the book called Wilderness: A Journal of Quiet Adventure in Alaska, published in 1920 and featuring his original drawings. It would be the first of several travel books authored and illustrated by Kent during his career and, like his paintings, served as another creative outlet for him to convey the experience of life in these varied places.

While Kent’s exploration of remote shores inspired much of his painting, he was also enamored with the bucolic scenery of the Adirondack Mountains found at the Ausable Forks, New York, farm he purchased in 1927. By then remarried after divorcing Kathleen in 1925, he poured his energy into designing and building a new home along with a studio, a working dairy barn and several outbuildings, and dubbed the property Asgaard, Norse for ‘home of the gods.’ When not on a return jaunt in Greenland or summering at Monhegan as he did from 1947 to 1953, Kent spent the majority of his time painting the landscape of his beloved farmland and hosting parties with New York glitterati, fellow Arctic explorers, and other creative types in attendance, which kept him connected with the art world. His paintings also continued to find an audience at gallery exhibitions in New York and touring museum shows, and at annuals at the Pennsylvania Academy of the Fine Arts, the Corcoran Gallery, the Society of Independent Artists, and the Carnegie Institute.

By mid-century, having become a major figure in American painting and a lifelong, outspoken defender of socialist causes, Kent ran afoul of the American government’s interests during World War II and the early years of the Cold War. As a result, there was a boycott of his dairy business in 1948 followed by the U. S. State Department’s refusal to renew the artist’s passport, a case that eventually made its way to the Supreme Court, which ruled in Kent’s favor in 1958. He was not a member of the communist party but the mere suggestion turned into a stigma at a charged period in the country’s history and led to another regretful circumstance in 1953 when he began talking with the Farnsworth Museum in Rockland, Maine, about a major exhibition. Ultimately, plans for the show fell apart when Kent was summoned to appear before Senator Joseph McCarthy’s Permanent Subcommittee of Investigations in August of that year and refused to answer questions. Hurt and angry at what he considered a breach of contract with the museum, Kent eventually decided to gift the ‘Great Kent Collection’ of eighty paintings and hundreds of graphic and literary works to the people of the Soviet Union in 1960, three years after he became the first postwar American to be given a solo exhibition there. While his passport issues kept him from attending the opening of the traveling show, he and his third wife Sally were able to attend the leg in Kiev after he won his Supreme Court case.

Kent had an undeniably fearless approach to life, punctuated by his excursions to some of the most isolated places on Earth and capped by his public battle with his own government. He remained active well into his seventies, both painting the landscape surrounding his upstate New York farm and completing his autobiography, It’s Me, O Lord, in 1955. While he had a stroke seven years later and lost his Adirondack home and its contents to a fire in 1969, undeterred, he began drawing up plans for a new building shortly after. Kent passed away in March of 1971 and today dozens of major museums across the country now proudly have a Rockwell Kent painting or illustration in their permanent collections.