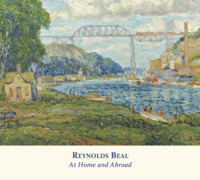 At Home and Abroad 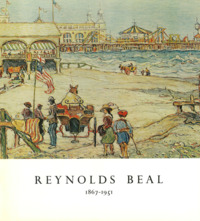 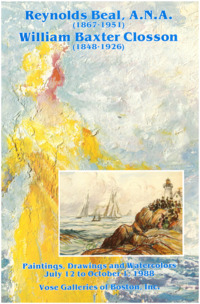 “In all the pictures of ships and sea that have been shown lately, and there have been a good many, none gives one such a sense of sea as those of Reynolds Beal…It is in dynamic design, rather than in color, that Beal achieves atmosphere.”

Born in New York City, Reynolds Beal showed early signs of artistic talent, but temporarily set aside his creative interests to study naval architecture at Cornell University. In 1890, three years after graduating, he returned permanently to fine art, first enrolling briefly at the Art Students League and later studying with William Merritt Chase at the Shinnecock School on Long Island. He also went abroad to Europe, sketching in Paris, Spain and even North Africa, before returning to New York and establishing his own studio. Serious, quick to absorb and advance, Beal was soon producing works of fine quality.

Free of financial constraints due to his father’s business success, Beal was able to paint full time and would continue his travels throughout his lifetime, exploring the waterways of Nicaragua and Costa Rica, the Caribbean, the North and Western States, the Far East and Europe. On his numerous trips between 1900 and 1920, he was often accompanied by such noted American Impressionists as Childe Hassam, Ernest Lawson, Hermann Dudley Murphy, Henry Ward Ranger, and his youngest brother Gifford Beal – a highly respected painter himself and a constant source of encouragement. Beal was an avid sailor, and the New England coastline, particularly Provincetown, Gloucester and Rockport, where he spent the last 20 years of his life, became his favorite subject matter. His dual interest in art and sailing resulted in a log of crisp, active works depicting boating events, shipyards, harbors and lighthouses.

An active member of the American art community, Beal joined numerous organizations, including the Boston Art Club, the American Watercolor Society and the Salmagundi Club, where he was awarded the Hurley Prize in 1902. He was also the founder of the Society of Independent Artists and the New Society of Artists, a group of about fifty of the leading painters of the day, including Childe Hassam, Maurice Prendergast and John Sloan. Beal held his first one-man show at the Clausen Gallery in New York City in 1905, and his second at Vose Galleries in 1916. He was elected an Associate Member of the National Academy of Design in 1909, and ten years later was honored to be one of a select group of American artists invited to exhibit at the Luxembourg Museum in Paris. Subsequent exhibitions, all well-attended and highly acclaimed, included the Milch and Kraushaar Galleries in New York City, and three solo shows after his death at Vose Galleries in 1973, 1975 and 1983. His work was included in exhibitions at the Corcoran Gallery, the Pennsylvania Academy of the Fine Arts, the Art Institute of Chicago and the North Shore Arts Association, and today his work can be found in many museum collections, including the Metropolitan Museum, the Florence Griswold Museum in Old Lyme, Connecticut, the Fogg Art Museum at Harvard University and the Phillips Collection in Washington, DC.

Beal produced a number of works “that show more interest in form and structure than is usual with impressionists and achieved expressiveness that partook of the style of both Seurat and Van Gogh.”[1] He continued his long-distance sketching travels into his seventies, but around 1940 opted to stay closer to his Rockport home, content with sailing familiar waters and painting local Cape Ann subjects, until he passed away in December of 1951. Throughout his career, Beal remained interested in new artistic movements, from the plein air Impressionism of his teacher William Merritt Chase and friend Childe Hassam to the simplistic forms of Japanese woodblock prints to the bold color and patterns practiced by the Post-Impressionists, yet he always retained an individuality and freedom of personal expression resulting in his own vital contribution to early 20th century American art.