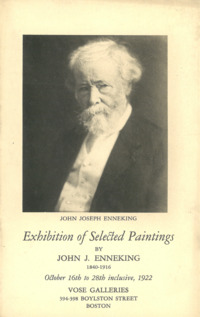 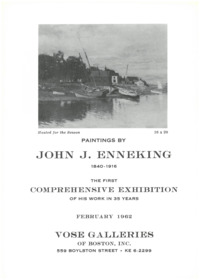 The First Comprehensive Exhibition of his Work in 35 Years

The Moods of New England

John Joseph Enneking, a man ahead of his time, had a stylistic foot in both the pre-impressionist and impressionist worlds of the late nineteenth century. An 1873 sketch of Madame Monet bears evidence of his work as perhaps America’s earliest impressionist painter. But he also knew Edouard Manet (1824-1898), and studied with the great French Barbizon teacher Charles-Francois Daubigny (1817-1878), as well as with Eugene Boudin (1824-1898).

Orphaned as an adolescent, Enneking was raised by an aunt in Cincinnati, Ohio, who encouraged his enrollment in St. Mary’s College in 1858. The President of the school fostered Enneking’s interests in the arts, but his studies were interrupted when the young artist joined the Union Army during the Civil War. He moved to Boston in 1868, studied painting and lithography for a brief year, and established a short-lived tin ware business. Interestingly, Enneking moved his young family to Europe in 1872 to pursue a career in the arts, which would prove both financially and critically successful.

Enneking’s study trips to Europe, all financed through the sale of his paintings, took him to the Munich Royal Academy for six months, and to the Paris studio of Leon Bonnat for three years. Travels to England, Austria, Italy, and Holland exposed him to nearly every major stylistic force during this time of radical experimentation. Enneking was not a copyist, however, but perfected his own style to such an extent that those conversant with his technique can identify his works without hesitation. Robert C. Vose (1873-1964), a young art dealer during Enneking’s later years, wrote about his style:

He loved Autumn with her glorious auburn tresses, and he loved Twilight, from her flaming sunsets, to her tenderest afterglows, for his keen senses thrilled with love of color… equally delightful are his groups of Trout Brooks, Pastorals in Blossom Time, and Mountain Views. Last, chronologically, and dearest to the artist’s own heart, are the “Moods,” a lovely series of impressions of nature, subtle, subjective, tonal harmonies, which will take high rank in American Art.

Enneking settled in Boston’s suburb of Hyde Park in 1876, and became one of Boston’s best-known landscape painters. Strongly tied to his local surroundings, Enneking was a devoted conservationist and acted as chairman of the Park Board during the end of his career, helping to preserve the salt water marshes of the Neponset River, as well as areas of the Stony Brook Reservation and Boston’s Fenway. In 1967, Enneking’s efforts were rewarded when State Representative Michael Feeney renamed a section of the Turtle Pond Parkway in Hyde Park the Enneking Parkway.

Enneking’s success as an artist was foretold early-on when Williams and Everett mounted his first solo exhibition in 1878, sold every work, and netted the artist $5,000. He then began to exhibit widely at prominent venues throughout the United States, including the National Academy of Design, the Pennsylvania Academy of the Fine Arts, the Art Institute of Chicago, the Corcoran Gallery, the Boston Art Club, Vose Galleries, and the Panama-Pacific Exposition of 1915, where he won the prestigious gold medal. He was included in the Paris Exposition of 1900, and in a group show in 1883 with Childe Hassam (1859-1935), Willard Metcalf (1858-1925) and Theodore Robinson (1852-1896).

In 1915 Enneking was honored at a testimonial dinner attended by more than 1,000 friends, colleagues and admirers, given at the Copley Plaza Hotel. Vose Galleries retained their devotion to the artist even after his death and has held six solo shows since 1916. In the 1917 memorial exhibition at Vose Galleries, twenty-seven landscapes were hung, sold out, re-hung with an equal number, and sold out again.

Kudos from respected art critic A. J. Philpott attests to the reputation of Enneking, a much beloved and talented painter:

John J. Enneking’s death will be a great loss to American art, for not only was he one of the world’s great landscape painters but he was, and has been for half a century, one of the healthiest and most inspiring influences in the American art world…”