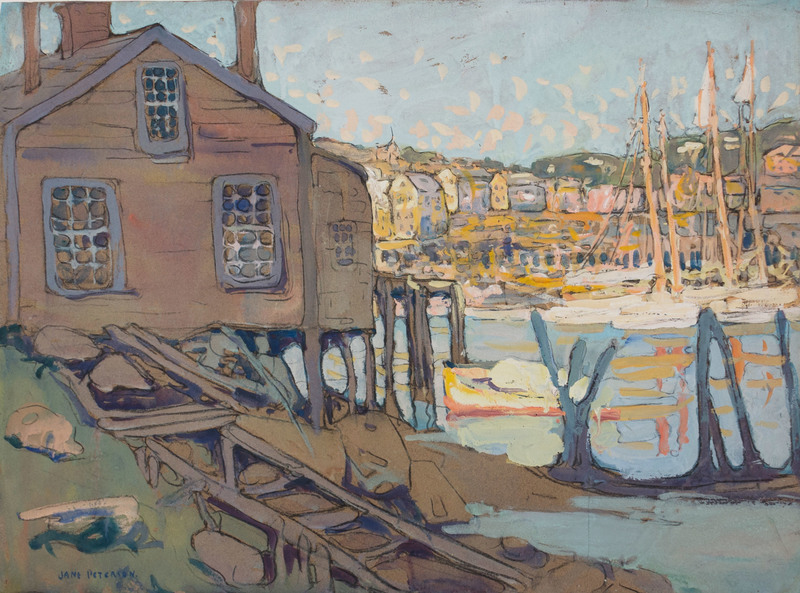 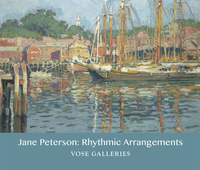 “Sex has nothing to do with it at all. Art is one activity where being a woman is neither a help nor a hindrance. Even a woman’s intuition means nothing when she is facing a canvas.” [1]

Jane Peterson’s first foray into the Boston art scene was in January 1909, when she exhibited thirty-three paintings at the prestigious St. Botolph Club. Already a vigorous realist, she favored intense color and bold brushwork. Critics liked her work; one enthused, “There is an athletic dash and swing to most of the paintings that is stimulating and captivating.” [2]

Born in Elgin, Illinois, Peterson showed talent at an early age and with her parents’ encouragement, moved to New York in 1895 to enroll at the Pratt Institute under the instruction of Arthur Wesley Dow. She also studied at the Art Students League with Frank Dumond and Henry B. Snell, and took on teaching positions to support herself. In 1907, Peterson went abroad to Europe, visiting England, Italy and France, and was enthralled by the artistic opportunities she discovered there. She valued her European studies with Frank Brangwyn in London, Jacques-Emile Blanche in Paris, and later with Spanish painter Joaquin Sorolla y Bastida during her second trip abroad beginning in the summer of 1909. After finishing her time with Sorolla in 1910, she traveled through Algeria and Egypt before returning to the United States to open a one-artist show at the Art Institute of Chicago.

While abroad, Peterson began to use gouache, a quick-drying medium that allowed her to paint en plein air and complete several pieces a day without the worry of carrying a wet canvas. In 1913, she became a watercolor instructor at the Art Students League, staying on for six years. Her next years were rich and prolific; she traveled and painted throughout the country and made regular visits to Martha’s Vineyard, Rockport, Gloucester and Ogunquit. In 1917, she was invited to join The Group, an exhibiting circle of Boston’s leading women painters that included Lilian Westcott Hale, Margaret Patterson, and Elizabeth Wentworth Roberts. Although short-lived, only lasting until 1919, The Group exhibited across the United States and was critically well received.

Peterson curtailed her foreign travel at the outbreak of World War I and during these years painted scenes of Americans’ patriotism, such as women volunteers at the Red Cross. After the armistice, she resumed her trips abroad and in 1924 spent six months in Turkey, exploring Constantinople (Istanbul) and Broosa (Bursa), a bold endeavor for a woman venturing alone. The resulting paintings were exhibited to critical acclaim at Ehlich Gallery in New York in 1925. In that same year, Peterson married M. Bernard Philipp, a wealthy New York lawyer twenty-five years her senior, and again her international travels ceased and she began painting flowers in her studio on Fifth Avenue in New York and in their home in Ipswich, Massachusetts. Mr. Philipp died in 1929, leaving her a woman of independent means, and she continued spending summers in Ipswich, dividing the rest of her time between New York and Palm Beach, Florida, where she had previously helped found the Palm Beach Country Art Club (later called the Palm Beach Art League) in 1918.

After a long and productive life, Jane Peterson passed away at the age of 88. She was a member of the National Association of Women Painters and Sculptors, the American Water Color Society, and the Allied Artists of America, and exhibited at several institutions, including the Pennsylvania Academy of the Fine Arts, the Art Institute of Chicago, the Panama Pacific International Exposition, the National Academy and the Corcoran Gallery, among others, and with the Robert C. Vose Galleries in Boston in 1925.