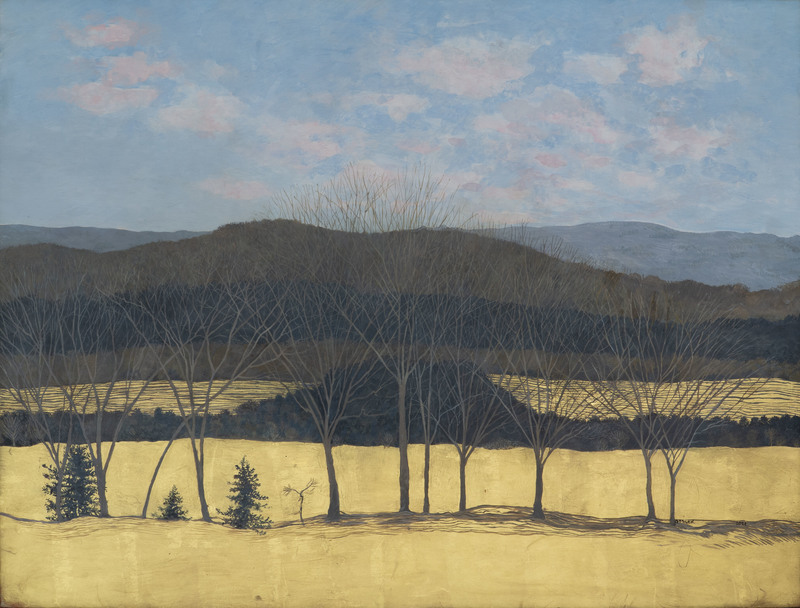 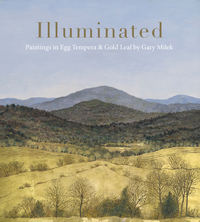 Gary Milek was drawn to nature and to the fine arts at an early age and has devoted his career to combining these passions, finding inspiration for his enchanting paintings among the hills and fields of Windsor County, Vermont, and within the orchards and gardens just outside his door at the Mileks’ Cider Hill Gardens. Born to a farming family in Glastonbury, Connecticut, Milek began his art education as a youth at the Wadsworth Athenaeum in Hartford and was awarded a scholarship to Syracuse University. He also attended Boston’s School of the Museum of Fine Arts, where he earned a grant to further his studies abroad at the Rijks Academy, the school of the famed Rijksmuseum in Amsterdam. Here Milek acquainted himself with the 15th century practice of preparing gesso panels, using egg tempera as a medium, and gilding with gold leaf, techniques he eventually implemented into his landscapes and botanical compositions.

After spending two years studying and copying the Old Masters, Milek arrived home in the United States and settled in New York. It was the 1960s and the city, as the center of the American art world, was gripped with a fever for abstraction, from which Milek was not immune. For a time he painted with oils in the expressionist style, yet he felt unfulfilled in this endeavor and decided to return to his roots, literally and figuratively – he embraced nature as his muse and began working in egg tempera, and before long relocated to the rural environs of northern New England. While pursuing his unique approach to painting, he also taught for seventeen years at Dartmouth College in Hanover, New Hampshire, before retiring in 1989. Since 1974, the artist and his wife Sarah, a talented horticulturalist, have owned and operated Cider Hill Gardens in Windsor, Vermont, where they grow pollinator-friendly plants and flowers using sustainable methods. This respect for the earth is reflected in Gary’s art, particularly in his application of gold leaf. In the words of Robert McGrath, Professor Emeritus of Art History at Dartmouth, “His use of gold leaf…is derived from late-medieval and early-Renaissance art, yet Milek employs that spiritualized medium not to symbolize Paradise but, rather, Heaven on Earth. Inverting the traditional hierarchy, he deploys the gold leaf for the foreground and middle distance rather than the sky. The intent is clearly to denote that Vermont is the earthly Paradise.”

Milek has exhibited in solo and group shows throughout New England and in New York City, including at such prestigious venues as the National Academy of Design, the Copley Society of Boston, Dartmouth College in Hanover, New Hampshire, and the Saint-Gaudens National Historic Park in Cornish, New Hampshire, and in 2012 he participated in an international art show entitled ‘Gold’ at the Belvedere Museum in Vienna, Austria. He has earned several awards over the course of his career, and the respect of fellow artists and collectors; famed American painter George Tooker fell into both categories and said of Milek, “[He] paints with a quiet and compelling lyricism. The work hangs harmoniously because of the talent, the depth of feeling, and the sincerity of the artist.”