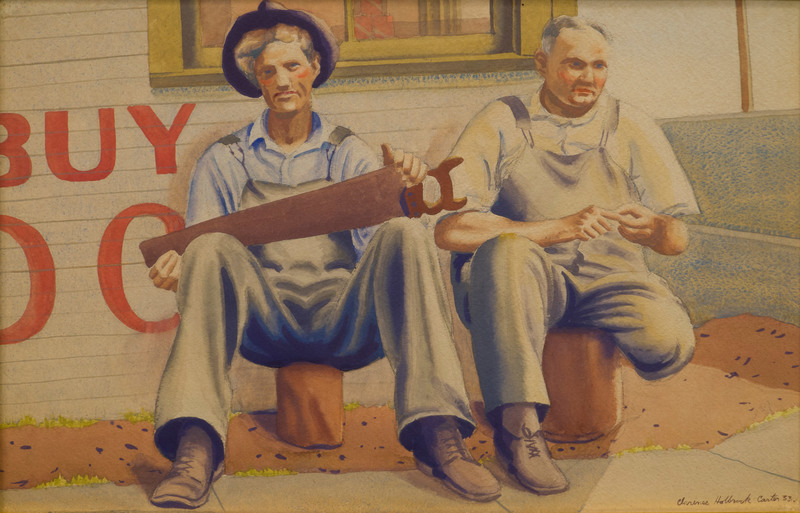 Clarence Holbrook Carter, an award-winning artist whose work was in 27 important American museums by the time he was 38, has been noted as one of the “most successful artists to ever come out of Cleveland.” [1] Born in Portsmouth, Ohio, Carter’s innate talent and enthusiasm for art was quickly recognized while in grade school, and in 1923 he enrolled at the Cleveland School of Art. By his junior year, he had several pieces featured in a group show at the Cleveland Art Museum, during which time he gained the attention of the museum’s director, Dr. William Milliken. This relationship proved to be a constant source of encouragement as Dr. Milliken inspired local collectors to seek out Carter’s work. The following year, five of his paintings were selected for a juried show held at his school and, cheered by Dr. Milliken’s enthusiasm, Ralph Coe, an important collector in the Midwest, bought one of his paintings. This was quickly followed by the sale of the rest of Carter’s work in the exhibition, earning him $800 to help fund his first trip abroad.

Upon graduating in 1927, Carter traveled to Florence, where Dr. Milliken and his mother hosted the artist in their home. Dr. Milliken urged Carter to take every advantage while abroad, including the opportunity to study with noted modernist artist, Hans Hofmann in Capri. Carter reluctantly did so, stating that “I wanted to be on my own and express what I was seeing and feeling,” [1] but this tutelage proved advantageous, as the work he completed during this time was featured in a show at the Cleveland Art Museum. All of the paintings sold, and one was honored with a first prize award. With that funding, Carter continued his travels to London, where he met Harold Woodbury Parsons, a representative of the Cleveland and Metropolitan museums. Impressed by his talent, Parsons purchased several pieces, even donating one to the newly developed Kansas City Museum which opened in 1940.

Just as the Great Depression hit, Carter returned to Cleveland, got married, and had his first child. Fortunately he was able to support his young family through the sale of his artwork, in addition to a job Dr. Milliken offered him at the Cleveland Art Museum. By now Carter had a well-known reputation, exhibiting both locally and nationally. In 1931, he was included in a group exhibition at the Frank Rehn Gallery in New York, hanging alongside such notable artists as Edward Hopper and Charles Burchfield. Carter had his first solo museum show at the Milwaukee Art Institute three years later, and in 1935 the Works Progress Administration chose him from a statewide competition to complete two murals for the City of Cleveland. The next year, Carter became the first resident of Cleveland to have a painting purchased by the Metropolitan Museum of Art, an oil called The Creepers. It was soon joined by a watercolor titled Semidarkness across the Meadow, acquired in 1939.

With his reputation widely known, it came as no surprise that Carl Braumo appointed Carter to succeed him as director of the Federal Arts Project of Northeastern Ohio. From 1937 to 1938, Carter reorganized the project, creating a functional gallery space, appointing separate heads of departments, and dealing constructively with the unions who often prevented the project’s ability to function. With these improvements, the FAP took on a vital role in the community, hanging a high caliber of art in public spaces such as libraries, schools and post offices. By reviewing each piece of artwork that went into the community, Carter began to recognize the importance of defining an American movement of art, stating “I became vitally interested in the Index of American Design because I felt that that was something that the United States had never had. We had no particular record of our arts and crafts of the past and it should be recorded.” [2] The FAP encouraged artists to portray American subject matter, and the resulting paintings from the 1930s took on a documentary aspect as the lives of everyday Americans were recorded. Having just experienced the Great Depression, most people were dealing with poverty and poor living conditions. Artists such as Ben Shahn and Philip Evergood input a layer of satire and social commentary into their works, while others like Grant Wood and Edward Hopper dealt mainly with small town America, often encompassing a feeling of nationalism. Carter fell somewhere in between these two elements.

Carter gained a national reputation for his American scene paintings, and was included in a 1943 exhibition at the Museum of Modern Art, titled American Realists and Magic Realists. After his successful turnaround of his region’s Federal Arts Project, he was hired at Carnegie Tech, as their art department was also in dire need of restructuring and they knew they needed Carter’s skills. He proceeded to teach at the school until 1944. While his artistic success continued, Carter began to evolve his style as abstraction became more popular. It was during the 1960s that he pursued an interest in surrealism and his art became laced with symbolism. He transposed organic subjects with architectural elements, often dealing with the concept of death, something he was all too familiar with having lost his father and two younger sisters when he was a teenager.

In 1972, Carter received the distinguished Cleveland Arts Prize for the Visual Arts, followed by a major retrospective exhibition held at the New Jersey State Museum in 1974. This exhibition traveled to the Oklahoma Art Center in Tulsa, then to the Art Museum of the University of Texas in Austin, then to the Mead Art Museum at Amherst College, Massachusetts, and finally to the Center for the Arts in Allentown, Pennsylvania. By the mid-1970s, Carter’s work had been featured in several museum exhibitions, including the Art Institute of Chicago (1934-1948); the Carnegie International (1929-1939); the Pennsylvania Academy of the Fine Arts (1929-1946); the Corcoran Gallery of Art (1930-1947); and the Whitney Museum (1933-1956). Today his work still hangs in these distinguished collections, in addition to the Museum of Fine Arts, Boston, the Brooklyn Museum of Art in New York, the Smithsonian American Art Museum in Washington, DC, and the Victoria and Albert Museum, in London, England.