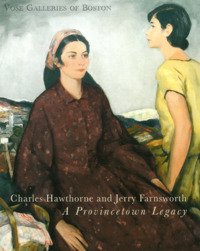 Oil painting has its limitations. We can’t paint nature; it is all a big prevarication, but we have to tell a convincing lie. You can make only a sign language for sunlight.

As a teacher of figure painting, New England artist Charles W. Hawthorne emphasized nothing more strongly than the importance of color harmony. Unlike many traditional painters, Hawthorne did not instruct his students in the fine art of draftsmanship, but stressed the translation of hues and tones to the flat plane of the canvas. Following his death, Hawthorne’s wife compiled his writings on art and a collection of notes taken by his students into the comprehensive text Hawthorne on Painting. This tome gives its readers the greatest insight regarding the distinctive style of the artist and confirms the painter Edwin Dickinson’s opinion that Hawthorne was the best teacher of his time.

Hawthorne studied under another great educator, William Merritt Chase, at his summer school on Shinnecock, Long Island. Raised in Richmond, Maine, Hawthorne had not shown a great proclivity to the arts until he moved to New York City during the 1890s. While working as a dock hand and an assistant in astained glass factory, he began taking evening classes at the Art Students League with Frank V. Dumond in 1893 and with George de Forest Brush and Siddons Mowbray in 1894 and ’95.  The following summer, he joined Chase at Shinnecock and would have continued on as his teaching assistant had the elder artist not sold his summer school in 1889. This may have been one of the most influential factors in Hawthorne’s career, for he took it upon himself to found his own program of art education in the Cape Cod town of Provincetown. Hawthorne directed this school successfully for three decades, carrying on the impressive legacy of hosting the only school for out-of-doors figure painting in the United States and largely founding the thriving artist colony that continues there today.

While Hawthorne drew knowledge and inspiration from many sources, he was always an independent painter, never closely aligning himself with a particular school or philosophy. In 1906, he traveled to Italy for a two year period and was struck by the power of Titian and Velazquez’s portraits. E. P. Richardson, Director of the Detroit Institute of Arts, credits this visit as being the most significant of his career, writing: “From the time of that Italian visit onward, Hawthorne knew what he wanted to do – to take ordinary people and things out of everyday life in America, and to transpose them into that plane of noble monumentality; he wanted to show the mysterious greatness and poetry of life there is in the most commonplace things when well seen.”1 Hawthorne learned from the quality of the Old Masters and turned to the local fishing folk of Provincetown for subject matter. His stoic representations of Portuguese fishing families are somber in tone, but dignified in composition, often with a figure directly engaging the viewer with a bold stare.

Hawthorne’s stunning portraits quickly elevated him to a position of national recognition; in 1908 he was awarded associate membership to the National Academy, and he gained full membership in 1911. Hawthorne was also admitted an Associé de la Société Nationale des Beaux after successful exhibitions at the Paris Salon. One of the highest honors he received as a professional artist was when the National Academy of Design judging panel voted unanimously to award him the Thomas B. Clark prize for his moving figurative piece, The Trousseau. The painting was recommended to the Metropolitan Museum of Art for purchase, and the institution swiftly agreed to add this piece to their permanent collection.