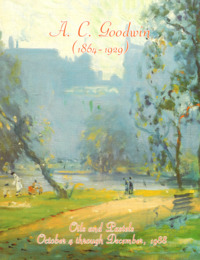 Arthur C. Goodwin, whose bohemian lifestyle gave him the title “Beau Brummel of Chelsea,” began an artistic career when he was over thirty years old. In 1900, he watched his artist friend Louis Kronberg at work on a pastel and declared, “I think I could do that.” Largely self-taught, Goodwin is best known for painting the wharves along Boston harbor and for his depictions of the city’s streets and gardens. He was inspired by fellow Impressionist Childe Hassam and proudly reported, “I just came from a visit to Childe Hassam and he said, ‘Goodwin, you are the greatest painter in Boston.’ As long as those who know [painting] feel that way toward my work, I don’t give a damn what the fashion of the day is. I paint what I feel.”[1] Although Goodwin was intrigued by the Impressionist concentration on light, he never ascribed to a particular artist or style.

In 1911, Goodwin exhibited at the Museum of Fine Arts, Boston, with many of the top Boston School artists. Soon after, he was accepted into the Guild of Boston Artists, and gained the recognition of such notables as John Singer Sargent and Isabella Stewart Gardner. Goodwin exhibited at the St. Botolph and Union Clubs, Vose Galleries, the Copley Society, the Guild of Boston Artists and Doll & Richards Gallery. He showed for thirteen years at many important national exhibitions, such as the 1915 San Francisco Exposition, the Pennsylvania Academy, the Brooklyn Museum, the Carnegie Institute, the Art Institute of Chicago and the National Academy of Design.  In 1974, 45 years after his passing, the Museum of Fine Arts paid tribute to this singular Boston artist with a retrospective exhibition of his work. Vose Galleries has enjoyed a continued association with A. C. Goodwin, featuring him in three one-man shows in 1920, 1985 and 1988.