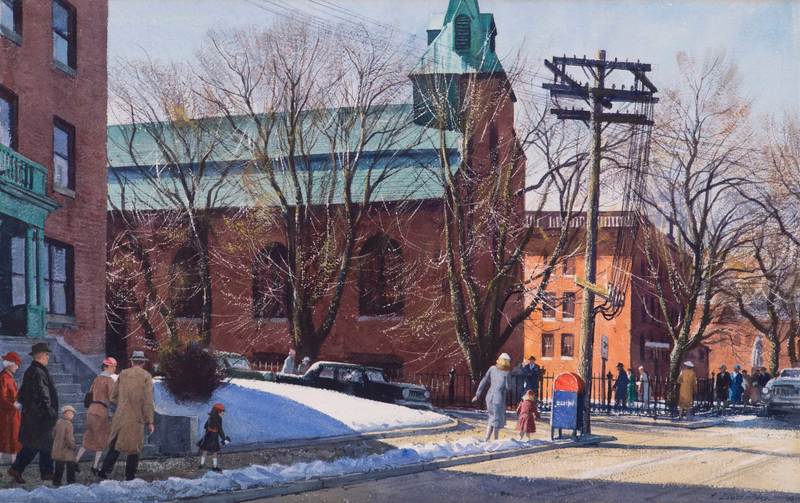 Although music was Aiden Lassell Ripley’s intended vocation, the study of wildlife and the natural landscape had fascinated him ever since his childhood.  Upon graduating from high school in Wakefield, Massachusetts, Ripley determined that painting was his true calling.  In 1917, he attended classes at the Fenway School of Illustration and continued his training at the Boston Museum of Fine Arts School under Philip Hale.  Showing great promise, he was awarded the Paige Traveling Fellowship and spent the years of 1924 and 1925 touring France, North Africa and Holland.  While not trained in watercolor, Ripley began using it during his trip abroad, finding it “a more practical medium for getting a number of subjects done, and easier by far to carry and set up.”[1] Upon his return to the United States, he settled in Lexington, Massachusetts and was once again caught up in the local scenery.

Ripley’s achievements as an artist were widely recognized by museums and societies alike. He became best known for his watercolors of sporting scenes and his depictions of everyday New England life, but still continued to exhibit his foreign landscapes as well.  He received numerous prizes, and exhibited works at the Art Institute of Chicago, the Pennsylvania Academy of the Fine Arts, and the National Academy of Design in New York.  Locally he showed his watercolors at the Boston Art Club, the Museum of Fine Arts and the Guild of Boston Artists, as well as annually at Vose Galleries as part of the Boston Society of Watercolor Painters from 1928 to 1935.  Today, he and Ogden Pleissner are known as the top sporting artists of their day.